Accueil > L’UACDDDD dans la presse > Statement following the armed robbery and burglary of the home of the GCLWS (...) 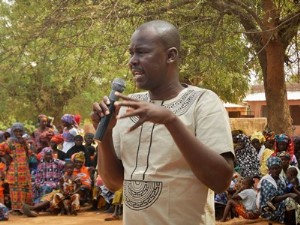 We the National Platforms of the Global Convergence of Land and Water Struggles in West Africa (GCLWS WA), representing 15 countries and organizations, are signatories to this declaration.

Our comrade Massa Kone was targeted in an attack at his home on Friday, Jun22, 2020.

Massa is the spokesperson of the GCLWS WA and No Vox Africa, a member of the international committee of the World Social Forum and part of the coordination for the Right to Food and Nutrition.

We are outraged at this shocking attack on Massa Kone and his family. Six hooded individuals dressed in military uniforms and carrying firearms entered Massa’s home and vandalized and looted it in the presence of his terrified children. We condemn this barbaric act against Massa Kone and his family, and warn those who sponsored it and carried it out.

We also give our full support to the victim and express our solidarity with Massa Kone,and with all the activists who have been criminalized in the context of their work indefense of human rights.

Today, an increasing number of activists, like Massa, are being intimidated, kidnapped or killed in the course of their human rights work. This is unacceptable

In each of these instances, we need to react and express our solidarity and our collective strength.

As civil society actors, organizations, movements, and networks, together with partners and allies at national and international level – assert the following :
– We emphasize the seriousness of this action to the Government of Mali. This attack is reminiscent of a past era and completely unacceptable in a country that claims to be a democracy. We are concerned that this situation could lead to further abuses ;

– We invite all human rights defenders, civil society actors, partners and allies at national and international level to mobilize and challenge the Malian government ;

There fore, we ask the Malian Government : Statement following the armed robbery and burglary of the home of the GCLWS WA spokesperson

– To take appropriate measures to protect Massa Kone and his family, and others who have been persecuted ;
– To open a judicial investigation to ensure that the people responsible for this aggressive action are held accountable and brought to justice ;

In addition, we seek the support of all diplomatic representations, including sub- regional, African, and international institutions in Mali. We ask them to demand that the

Malian Government take all the measures necessary to guarantee the safety of human rights defenders, particularly Massa and his family. Bamako, June 22, 2020